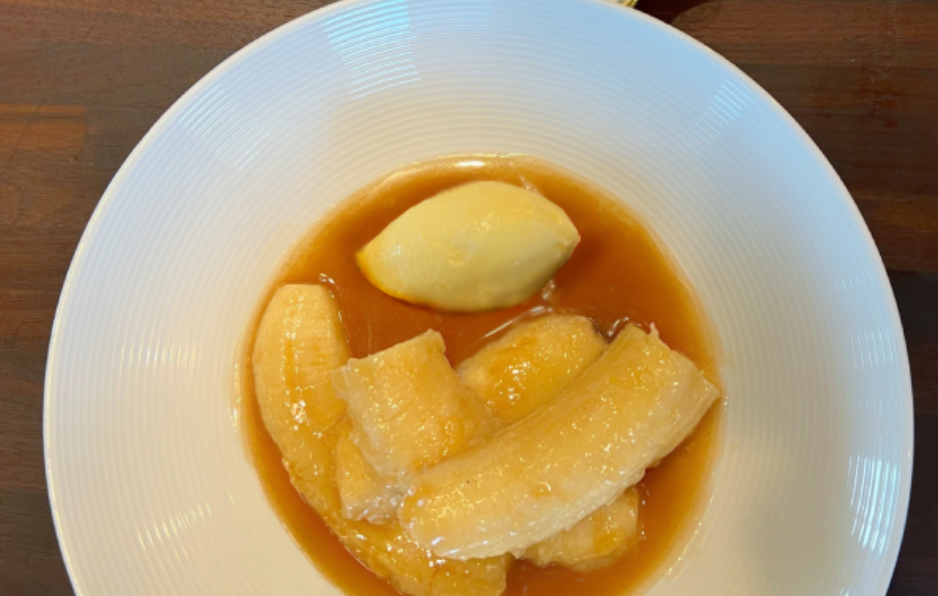 This recipe is inspired by one of my favorite recipes from Brennen's restaurant in New Orleans, created by Ella Brennen. A pioneer of the modern American food movement, she pushed her chefs to the forefront helping to launch the celebrity chef phenomenon. Many credit the Brennan family, guided by Ella for pushing Creole cuisine into the American mainstream and creating a lasting impact on how Americans eat and drink.

For the Banana Foster:

For the Vanilla Ice Cream:

For the Vanilla Ice Cream:

My preferred equipment to finish the ice cream is the Paco Jet, which delivers a silky smooth texture that is restaurant quality. If you do not have one available, you can use your favorite Vanilla bean ice cream or use an ice cream machine by pouring the chilled custard directly into the machine and following the manufacturer's directions.

Nina Compton was born and raised in St. Lucia. She grew up with the flavors and beauty of the Caribbean and pursued her career in the United States. She graduated from America’s finest culinary school and developed skills that allowed her to be an award-winning chef and restauranteur. She is the chef/owner of Compère Lapin in New Orleans’ Warehouse District. Nina also has a second restaurant venture, Bywater American Bistro (BABs), located in New Orleans’ “Sliver by the River” Bywater neighborhood.

Since opening Compère Lapin, the restaurant has received critical acclaim awards including Eater National's "Best Restaurants in America 2017", a rave review in The New York Times, and Top 10 Winner of Playboy's Best New Bars in America 2016. At Compère Lapin, the talented toque creates robust dishes that meld the flavors of her Caribbean upbringing and love for French and Italian cuisine, while highlighting the Gulf and Louisiana’s beautiful indigenous ingredients. Nina is the winner of the 2018 James Beard Awards “Best Chef: South” and one of Food & Wine magazine’s "Best New Chefs 2017".